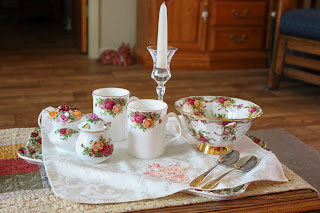 It's time again for Tea Things Tuesday.
Kim from Shabby, Pink and Pretty
is the sponsor of this weekly event, and to see some beautiful tea related posts by some really talented ladies, visit her blog for links.
In Orlando, Florida where we live, there are many outlets and I used to regularly haunt them. Now I hardly go anymore, as I have run out of room in my home for more treasures. I have acquired a set of Royal Doulton's Old Country Roses pattern with settings for ten, and also many cute little accessory pieces and serving pieces. The pattern will probably show up again, but for this week I wanted to share a few pieces. Admittedly, the little creamer would be useless in an actual tea serving, but it is so charming, and looks nice with the little usable sugar bowl that my daughter got me for my birthday this year. 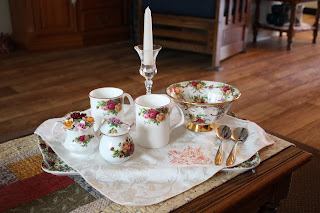 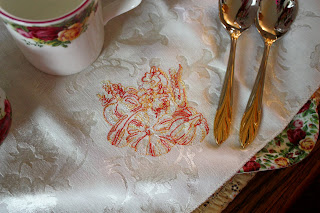 Last Thanksgiving, we had the whole family over, about a total of thirty people give or take, and I used my embroidery machine to add designs to a napkin for each person. It's almost time to use them again. Hard to believe that it is almost that time, and there is planning to do. I thought that I would borrow one to cover my Old Country Roses plastic tray.
DH was in the hospital and is going very well, my DD's fiance was in the hospital and is also doing much better, and now my grandson is in the hospital. I was there most of the night day before last and spent most of the day yesterday there. I got home about 7:00 pm yesterday and then slept for about 5 hours. Now it's almost 2 am and I'm not at my best, so please excuse anything that isn't making too much sense. The doctor said that perhaps he will be out today, and I hope that that is right. When he was about to turn 2 years old he fell on a knife, and then had to have surgery when he was 7 for adhesions caused by the knife accident. He has problems off and on and will eventually have to have more surgeries, but hopefully this is not the time. He is doing better, and if it wasn't for the stomach, intestine problems, he would be 100%, he is still strong as an ox and solid as can be. He's 24 years old now.
They say things come in three's, so hopefully this is the end of it. If we need something for good measure, DH's sister was also in the hospital briefly for irregular heartbeat and my pregnant DGD spent a few hours in the ER checking out chest pains. They are both fine.
Have a happy Tea Things Tuesday.

Your tea set is beautiful, and your embroidered napkin idea is really neat!

I'm glad everyone seems to be on the mend, but try to stay away from the hospitals, would you?
Have a great Tuesday, and take care of you.
be blessed,
Michelle

I love the Royal Doulten pieces. I am also a Florida girl and have visited the outlet stores myself. Thanks for sharing your beautiful tea set.

What a beautiful tea set. Hope everyone is better. Thanks for sharing your lovlies.

What a lovely tea set you have shared.
That is a pretty napkin to and what a brilliant idea! Yes Fsll Days are here...love it!
Hope all your loved ones are on the recovery road.
Lola

I love old country roses. Beautiful set up. The napkins are lovely also.

I am so sorry to hear about your family. Hopefully you will have a break for awhile and things will run smoothly!
Valerie

Oh my Candace. What a stressful time for you and your family. I pray that this will be the end of it and things will get back to normal for you soon.

Your tea tray today is just beautiful. All those pretty roses on the china pieces and your beautiful embroided napkins. I hope you had time to sit and relax with a pot of tea after you took your pictures!!

Your tea set is beautiful, a lovely setting..
Hope all your loved ones are on the road to recovery..
In my thoughts..
Julia ♥

What a pretty teaset you have shown!! Sorry to hear about everyone being in the hospital. Hope they are all faring better soon.
♥ Rebecca

I'm a big Old Country Roses fan, and have a large set as well. They look beautiful with the reds and greens of Christmas, so I use them alot during the season, especially for tea parties. Sorry to hear about your grandson, but glad to hear that everyone else is doing better. Take care and God bless,

Hi, Candace,
I love the pattern on your tea set. It is one of my favorites. I like the way you embroidered the napkins, too. This made Thanksgiving very special for your family. I hope everyone has recovered completely from their hospital stays. I enjoyed my visit with you and plan to participate next week in Tea Tuesdays. If you have the opportunity, please drop by for a visit at Bunny Cottage. Vicki

I do hope all your family is on the mend and doing much better. Your china is so pretty!

What a lovely set ! I hope your family continue to improve and stay well .

Thanks for your visit. Love your tea things nice display of treasures.

Hello, thanks for coming for a visit and having Tea with me. I love your tea set!! It is gorgeous.
♥ Rebecca