One Down Fifty-Nine To Go

Step 4 of my Orange Crush is finally finished, and I am so excited to finally be sort of caught up, and to be cutting into my orange and blue fabric. The blocks are kind of subdued, but I don't think that the quilt will be when the other two fabrics are added. I think it will be saying, "look at me". 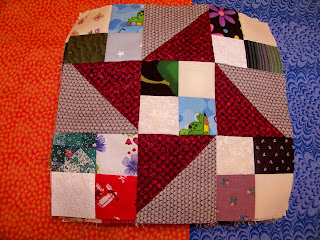 Also, I just wanted to confess that the missing parts to my featherweight were in the box, but at the bottom of about 2 feet of styrofoam peanuts in a baggie. I think that they were probably taped to the outside of the case and came loose. I haven't tried it with thread yet to see if it works and sews. I see from the featherweight group that I just joined that some sellers don't differentiate between the two in their ads. I guess to them works means that the motor turns on and it goes up and down, but it may not actually sew. I guess that I will find out which mine is. It does work, and I hope it sews.
Also, if you have visited my blog, you may have noticed that with the help of
Helz from Blue Shadow Pony (I love her blog and it's name) I went to:
http://www.pyzam.com/bloggertemplates and got a new template for my blog. I like the looks better, but now I need to scour around and try to find my little buttons or widgets, or whatever you call them, for the sides. It may be a day or two though, as I hope to at least do some cutting today on my OC.
Posted by Candace at 9:25 AM 6 comments:

When the doorbell rang this afternoon, I wasn't expecting anyone, and was surprised when it was the mailman at my door with a big box. (Also, a baby lizard that my husband got with a paper toweled hand and sent back outside.) I only ordered my featherweight a couple of days ago, but there it was. It had to come less than 150 miles, but it was still a surprise.
As you can see, it is a bit scratched up, but I hooked it up, the light worked, and it purred along. I couldn't try any actual stitching, as the bobbin case that was supposed to have come with it wasn't there. I have already emailed the seller, so hopefully it will be coming soon. The part that holds the thread on top was broken, and that was supposed to have been included also, but wasn't. Hopefully, this lady is a reputable person and will make sure that I receive the missing parts. 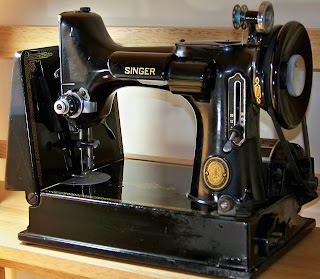 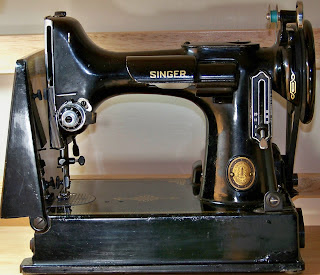 I have looked on line and found a place that has all kinds of parts including the part that I am missing on the top, and it looked to be reasonable. It does look like a toy, even my Janome Jem looks like a big bully in comparison. I am anxious to see the famous featherweight straight stitch.
I was glad to have a pleasant surprise, as this morning was fairly unpleasant. I tried for hours to order some collage prints online, and finally called the company. She did the best she could, and then checked with the supervisor who told her to check with the technical people. I am waiting on them now, so I guess we'll see how they do. At least, it wasn't me. 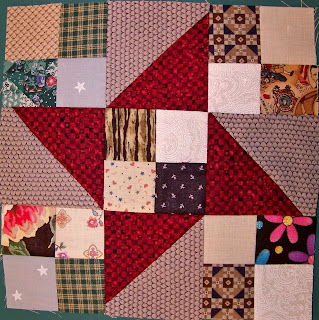 After all the work, I finally have a block. I am including steps 1 and 2 of the CC in that work. Only 100 more triangle sets to sew together, and 29 more blocks to piece, and I will be done with step 4 of the OC. I can see I need to mix things up a bit more, but I was so excited to put a block together that I guess I didn't really look that hard. As careful as I tried to be, I had to do a little ripping. I had my red where the black should be, and my black where the red should be. Luckily, I only had to undo 3 little seams. As usual, my angle is bad. I don't have a design wall, but I'm thinking that I will make myself a small flannel board so I can at least put up a block or two. 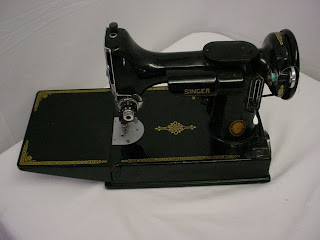 Now for the moment of insanity. I don't need a machine. I have my 18 year old Bernina, and my Janome Jem, and even a little blue Sears machine that I bought for an uninterested granddaughter. So why when I saw conversations about featherweights did I look on Ebay, just out of curiousity? I don't know, but when I did, I got the impulse to put in a bid, and then another bid and another. Finally, I reached my absolute limit, and was waiting in anticipation, half hoping to win, and half hoping to lose. As you have probably surmised, the win half won. I had always liked them, even before I knew what they were. I used to sew with my friend in Massachusetts about 35 years ago, and she had a cute little black machine. I'm not positive, but I would bet that it was a featherweight, and as you can see, it stuck in my mind. Then when I started quilting and learned what they were, I wished that I had one, mostly because they are so cute. According to the information, it is in good condition and works. I am hoping to study up, and get it in really good condition, but I also am wanting just to display it in my sewing room. Again, it's so cute.