Second Quilt for 2010 and Second Finish for the Week 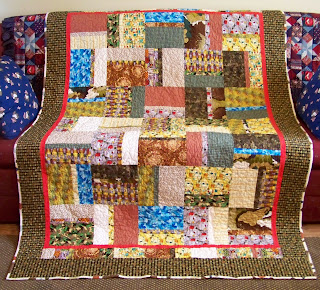 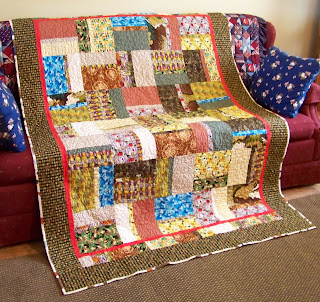 I don't know if anyone remembers my four big boy quilts which I thought were quite homely.  This is the first one finished (finally; the back says Robert 2009) and I'm actually very pleased.  The pattern doesn't show up well here, but each block is a medium strip, a small strip and a large strip.  I copied it from a quilt on another blog, which I thought looked quite good, and easy.  The four are all basically the same, although the blocks are random, except each has a different border.  Now, only about ten more tops and I'll be caught up, lol.

I have decided that although I'm not good at it, I do enjoy the free motion quilting.  I don't know if I'll progress to much more than meandering, as I don't have any artistic talents, but I am improving a bit, and it is fun as long as the machine cooperates, and my Juki has been doing well.

The part that hangs me up and makes me procrastinate is the basting.  Boy do I dislike basting.  I tried pins, not so good, as I tended to run over them now and then and break my needles.  Next, I tried Sharon Schamber's board method, which I rather like.  I tried it with basting spray instead of thread, and it worked wonderfully except for the sticky mess.  Also, my DH got pneumonia and I felt that the spray could have contributed.  On my GGD's baby quilt, I used Sharon Schamber's method with the thread, and it worked well, except it is so time consuming.  I guess, unless someone has a better suggestion (other than a frame, lol) I'll keep doing the thread.  I have a goal to get my backlog done, and then to not do tops unless I finish them right away.  On one of the Yahoo Forums someone was talking about unquilted tops being closet clutter, and it sounded right to me, lol.

Here's a link to the board method:
http://www.sharonschambernetwork.com/free_area/videos/basting/index.html

Great job really like them. I have pinned, basted, and used the tacker also and I actually think basting is the best and less expesive. I need to finish sewing down the binding on Faiths. I will have surgery on my worst leg on the 1st of April and I can't wait. Hugs,Marie

Candace,
I spray baste all my quilts- I can not imagine doing anything else. It is not too expensive ( not as cheap as thread) but way faster than any other method I know. I have used safety pins but broke lots of needles that way too. If the ventilation is good - then the spray works well and you can get it done in not too long a time.
I have a babylock but learned to meander on a Juki- They are both nice machines and you sure can go fast on them.
I really like your boy quilts- every boy can use a little pink in their life LOL
It is the beginning of spring vacation and I hope to quilt a little and sort out things at school for part of it. I want to get the classroom packed up as we are having a major reno done and need to move into the gym while they are gutting the classroom. My kindergarten class is very full of stuff. We have turfed some things and need to turf much more...
Thanks for sharing your beautiful quilts.
Regards,
Anna

Awesome that you area getting them done! Way to go! I have my mother's cedar hope chest full of quilt tops that I need to quilt. I think I'll take my inspiration from you and set a goal to get them done. I have tried the Sharon Schaumber method for basting and I like it. I had planned to do the spray baste with 505, but may try a really small practice one first to see if it gets too sticky.

Keep up the good work, fight the fight!

Gorgeoua quilt Candace.. me too, I hate the basting,,Keep going Candace..you'll get them done.
Julia ♥

I can't imagine any reason why the boys would not like your quilts, this first finish looks great. I think we all hate basting. I use spray for small quilts, table runner size. I thread baste for hand quilting, but it's such a pain to pull out if I've machine stitched over it, so I use pins for machine quilting and just take my time. I'm sure you'll find your quilting improves a lot by the time you've finished that lot. I've suddenly reached the point where I feel as if I'm in control, not the machine, and I've been doing a few flowers and leaves as well as stippling.

I love your manly quilts! Makes me want to make some for my boys!

The quilt is great-The colors are bold-I am sure it will be appreciated. I am considering trying other ways of basting. So far all I have tried is pinning.

Congratulations on your second finish of the year! You are catching up in a real hurry. I like spray basting for small quilts, and It has good results, but I do it outside to avoid the fumes in the house as long as the weather is nice, it is easier for clean up too. I use pins for the bigger ones, but I have to admit that taking them out is a real pain.... It does all get easier the more you do it though, so keep up the good work.

These are wonderful colors...really nice job....I am determined to finish some projects that I have started or have material..pattern for this year...

Its a wonderful quilt. I just love the way the blue or teal pops out at you.

I usually pin baste if I am machine quilting or thread baste if I am hand quilting. I find it relaxing to baste, but oh my aching back from all that bending over to do it. I am anxious to try the board method - looks like a sure fire winner.

The quilt turned out great. I am sure Robert will cherish it!
Valerie

The quilt looks great! There is nothing wrong with a basic meander and if that is what gets those quilt tops finished - go for it!! Basting is my least favourite part too - I usually use safety pins, but have used the spray baste in the past :)

I think you quilt came out very nice. I'm way behind on blogging have been taking an EQ6 Sampler Class at Quilt University and now have to get taxes done. Plus have had company two seperate times in March.